Moving down the garden The first picture shows the line curving round a birch tree as it comes off the steps that lead down into the garden. The next shot shows the route coming round the back of the flower bed/eventual shrub garden. Finally, the photo below shows the extent of the main station area which has three tracks through it. At the far end of the station, the track heads out towards the bottom of the garden. Extension down here will have to wait until work on the shed is completed (we're very nearly there!) and we've decided how to run along the bottom of the garden - again, we've nearly worked that one out, but there's a load of old timber and a felled ash tree in the way, which will have to be sorted out first. Although we're still quite some distance from getting all the way round, we're a good half way there now and with ideas of how we want to fill in the other half. 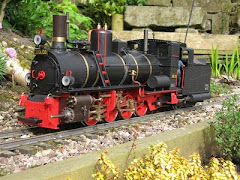